Both “Portable Catfight” and “CatFight” came about from an image in my mind of two cat skeletons in combat. What I’m especially drawn to in the image is its ambiguity: it might be comical--think of the classic cartoon image of a cat with its tail caught in an electric socket, the silhouette of its skeleton flashing on and off—or at the other extreme a primordial fight-to-the-death scene, mano a mano.

CatFight was fairly well-composed in my mind when I arrived at ArtPace. Still, my first work there was to sketch out, in collages and drawings, where each cat would be positioned. At first I imagined them on hind quarters about to pounce each other symmetrically, as equals. But when we started positioning the bones, I was drawn toward a relationship that seemed more energetic, with the one cat appearing to have the upper hand. There seemed to be more at stake in the final arrangement, more to engage observers the way sports fans watching a fight might experience a vicarious rush of adrenalin, an elevated state, almost a pleasure, a sexual turn-on. But as with all catfights--which from my own experience typically end up with the engaged felines slumped in an exhausted lick-fest—the appearance of full-throttle survival instinct could collapse into play or even dance. I adorned the teeth and nails of the cats with shiny silver leaf to further problematize the “fight” of the fight, and I added an audience of viewers from the animal kingdom--the rigid aluminum snake-puzzle sculptures—to enhance the sense of threat and comedy at once.

When we finally lit the sculpture I was thrilled to see how the reflections of light in the monofilaments suspending and binding the bones radiated the force of motion out to the edges of the room. I like to create spaces a viewer can experience as an image, but also have the opportunity to walk into and inhabit. In CatFight you can step into a space of spectacular (in the literal sense) propulsive energy—whether you see it as sheer violence or a more nuanced natural force. 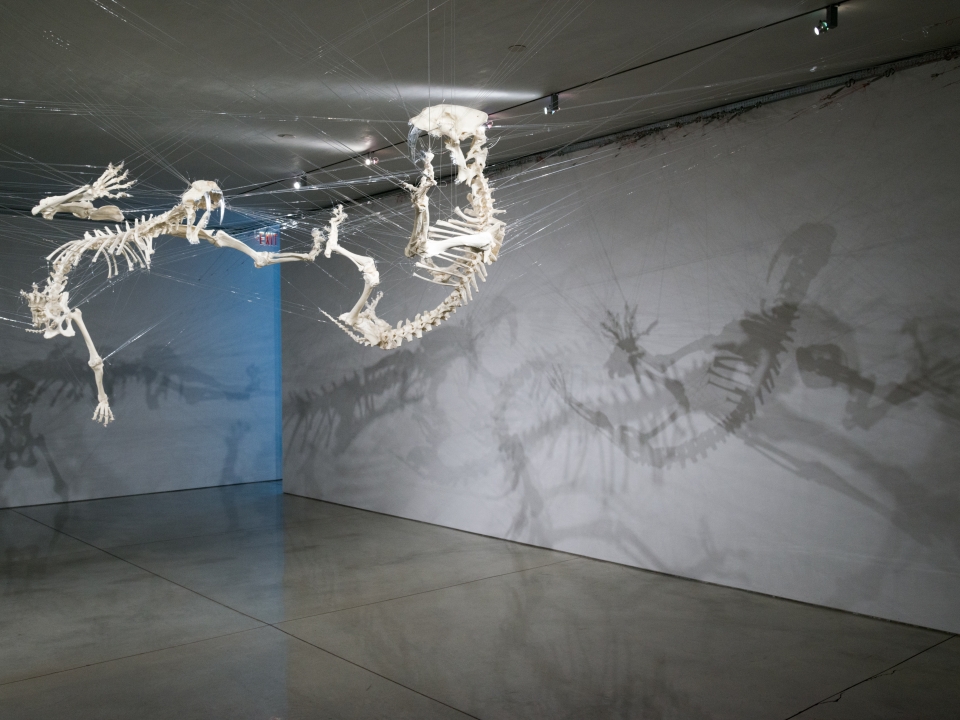 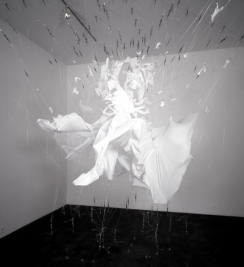 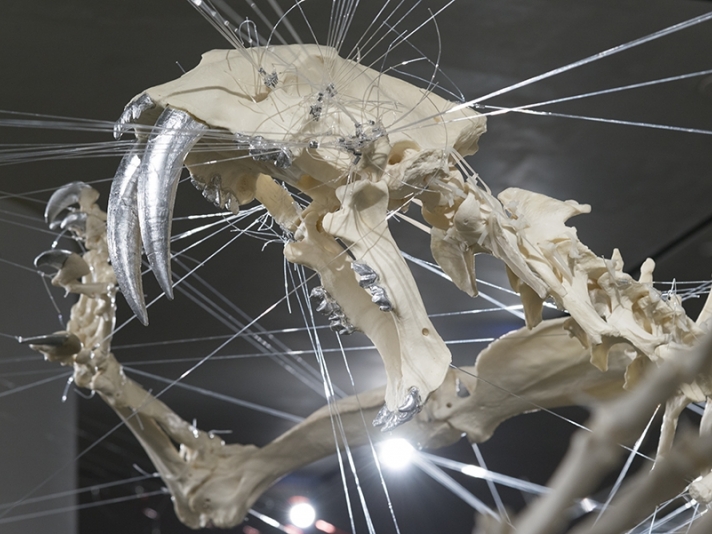 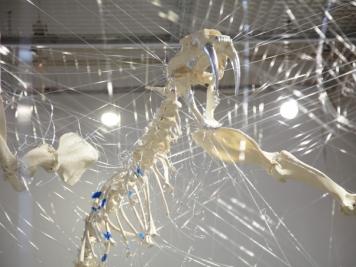 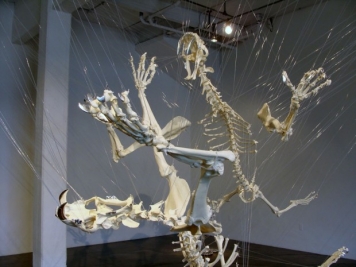 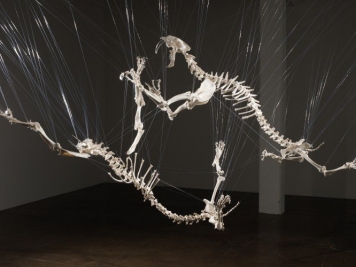 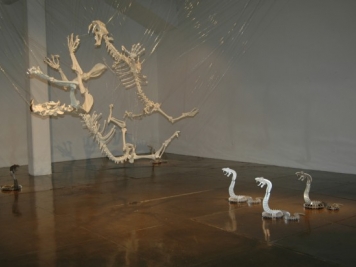 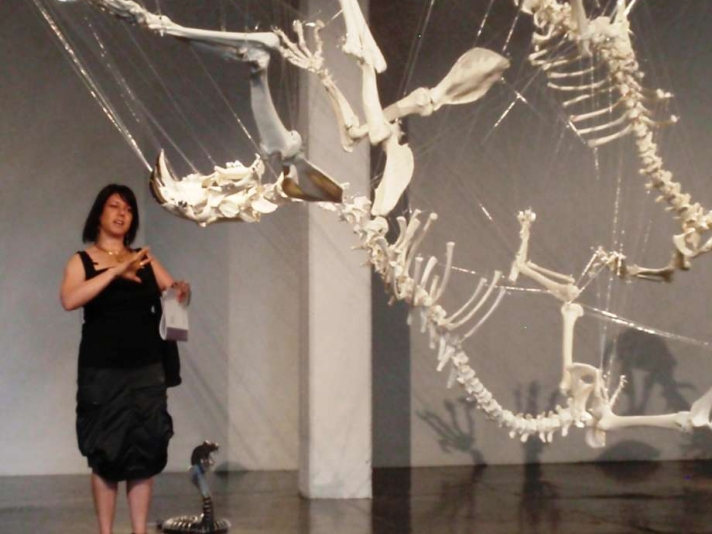 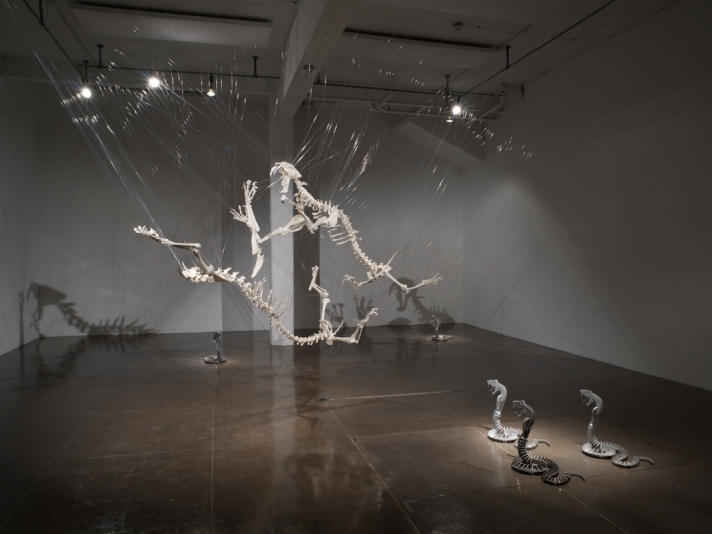 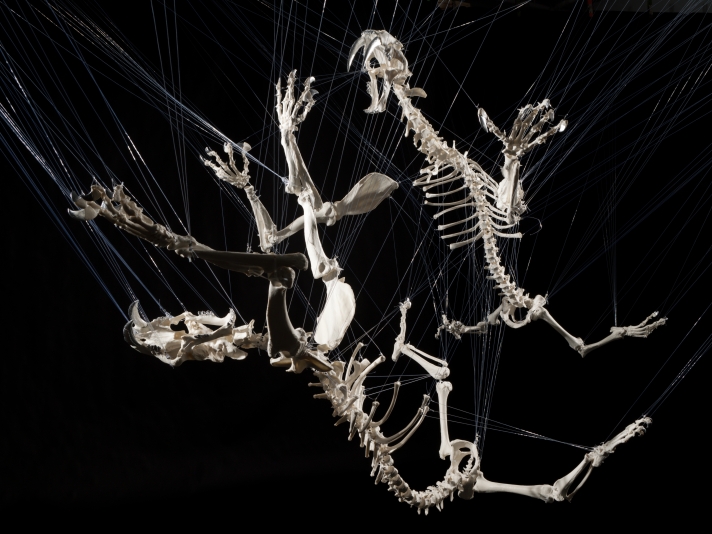