The video Wanda’s Heart was commissioned to be the projected back-drop for the first live staging of Il Cuore di Wanda (1931), a futurist opera, performed in the cryptoporticus of The American Academy in Rome for the opening of Cinque Mostre: Visions, 2.14.17.

The video’s narrative is inspired by the libretto for Il Cuore di Wanda, written by poet and surgeon Pino Masnata. Prior to Cinque Mostre at the AAR, Il Cuore di Wandawas performed just once, in 1933, via radio broadcast to listeners in Rome. The Italian Futurist movement favored electromagnetic waves as a conduit for information and music transfer; futurists considered music performed live before an audience in a concert hall to be primitive.

Wanda’s Heart combines found footage and visuals filmed by iphone. The soundtrack was recorded in a studio by Danielle Simon, with soprano Gaia Mattiuzzi and tenor Ryan Matos. 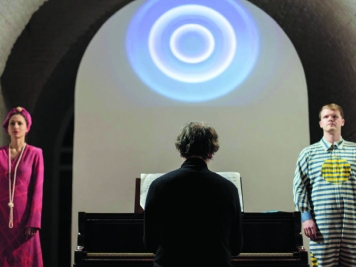